So, I’ve mentioned before that I live in a rather small town.  I mean, we have multiple traffic lights, a target, some other shops, and some chain restaurants.  But compared to the little big town of Nashville, where I used to live, it’s small. While my favorite places to eat are typically local joints, I do have my favorite big box restaurants as well.  Unfortunately, we do not have a Chili’s in our town.  (Well, maybe that’s a good thing, actually.)  So, I miss my triple dipper favorites.  I know it’s terribly fattening, but when I dine at Chili’s, I always get the Chicken Crispers, Big Mouth Bites, and Southwestern Egg Rolls.  I especially miss those Southwest Egg Rolls.  Now, I know Chili’s has a line of frozen foods.  But honestly, they’re just not the same.  These delightful Southwest Egg Rolls are pretty close with one exception: I think they’re much healthier than the ones served in the restaurant.  Now, I haven’t confirmed that, but I do know that you are in control of how you prepare these vs. letting them be cooked in masses at the restaurant.   These are not as greasy and are baked, not fried.  So, yeah, I’d say they’re much healthier.  I mean, hey! They have spinach in them, right?! If you want to be extra healthy, go lighter on the cheese.  But if you want to really enjoy these for what they are, then do so with a clear conscience.  They are delicious!

Preheat oven to 350 degrees.  Heat oil in large skillet, cook chicken with salt and pepper until white.  Add onions and cook till chicken is completely done and onions are clear. Stir in spices, corn, beans, and jalapeños until spinach wilts. Take off burner and stir in pepper jack cheese until melted.  Spoon about 1/4 cup of filling into each tortilla, wrapping tightly like a mini-burrito, seem side down and placing on a baking sheet or in a pyrex dish. Brush each side with olive oil.  Bake 20-25 minutes, flipping halfway through, until crispy. 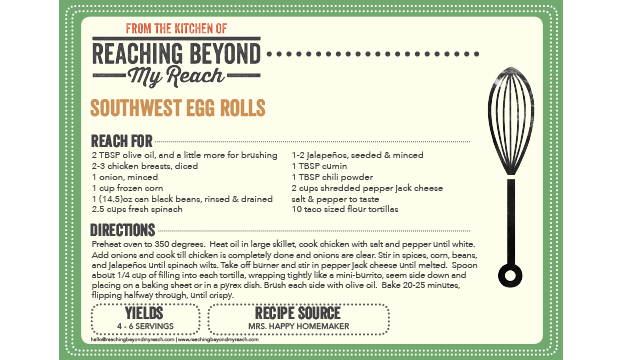 Be sure to stop by our friends at Buns In My Oven to see us featured on their linky party!