I love my husband.  I think he’s just plain awesome.  Because, he is awesome.  He’s so full of awesome characteristics, talent, heart, and quirks.  One of his quirks…or talents perhaps…is recognizing the genius of obscure musicians before they hit the big scene.  A few years ago, he found out about this band called Vampire Weekend.  He started listening to them quite frequently.  They’ve since made it big and one of their most popular songs is about something called Horchata.  David, a fellow marked by a curious soul, googled Horchata and found that it’s a sweet Mexican Rice Milk Drink. His next question? Where can I try some? He found that his very favorite restaurant in the whole wide world, Baja Burrito, in Nashville, TN carried it.  He tried it and fell in love.  Sadly, we moved away from his favorite restaurant.  He had not partaken of this beverage in over a year before we tried a Mexican joint in our new town of which we had never previously darkened the doors. He was elated to find a local place that serves it.  But the trouble is, when you go out to eat, the bills rack up quickly.  After a few weeks of dropping not so subtle hints that he wanted me to learn how to make it, I finally decided to check it out.  I had thought it must be uber-complicated.  But hark! It is not! So, on his first day back to school for the fall semester, I had a jug of it waiting for him.  And that, my friends, is how I earned my blue ribbon for wife of the year!

Pour the rice and water into a blender and blend for approximately 1 minute until rice just begins to break up.  Let sit for at least 3 hours at room temperature.  Drain rice water into a separate pitcher. Add remaining ingredients and stir well.  Refrigerate and serve over ice. 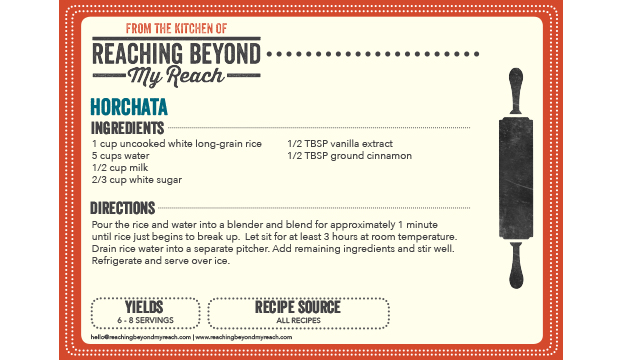